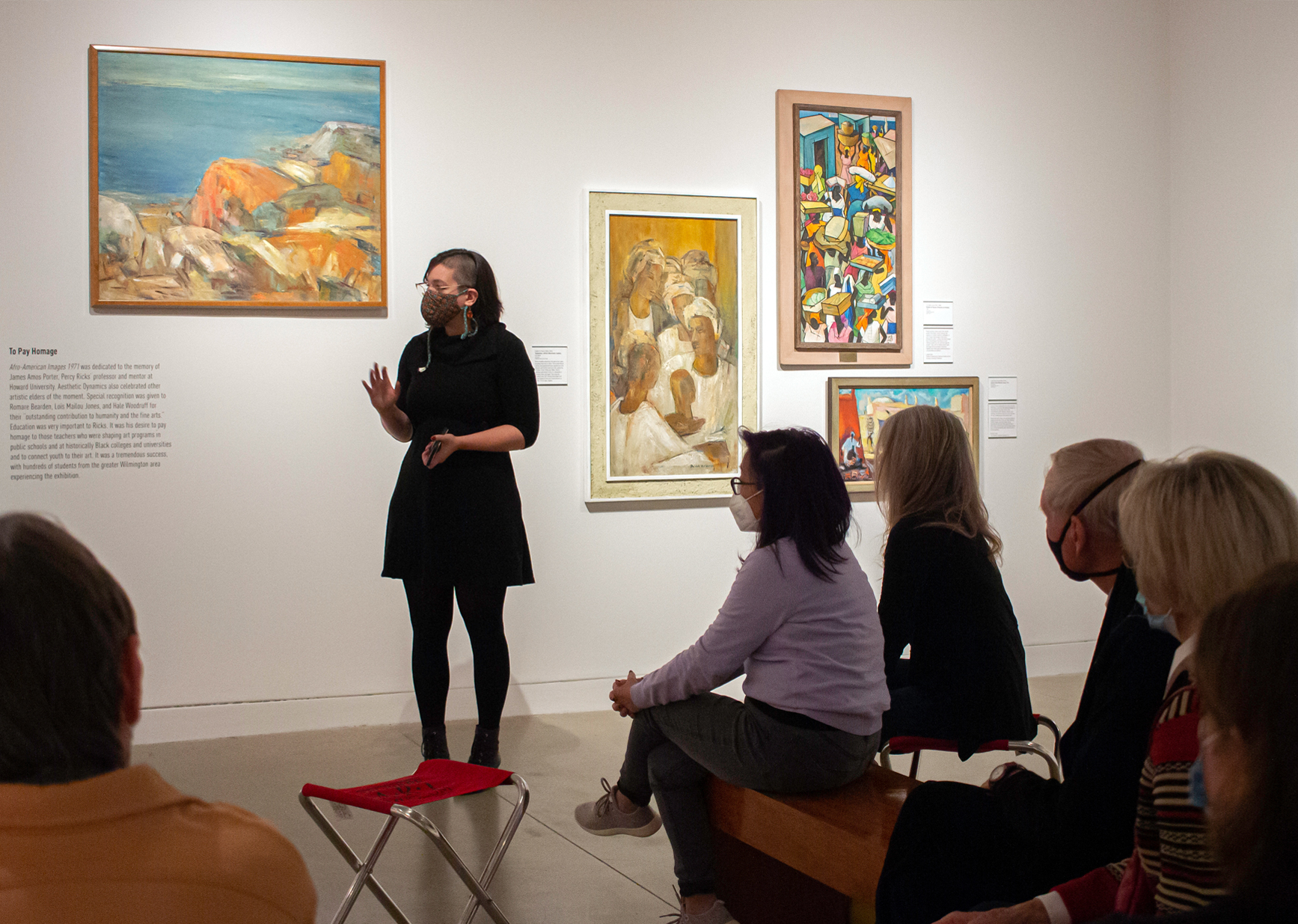 Alma Thomas’ Spring-Delightful Flower Bed (1967) provides an excellent introduction to the genre of abstract expressionism and more specifically, to the work of the Washington Color School. Developed in the 1940s and 50s, abstract expressionism remained an influential style in American artistic circles through the 1970s. The movement focused on the idea of instinctual or subconscious painting, pulling away from replication by emphasizing automatic gestures. Famous participants include Jackson Pollock’s splattered “action-paintings” and Mark Rothko’s color fields, where large spans of a single tone dominated the canvas.

Inspired by these works, the Washington Color School followed slightly behind its New York City-based predecessor. Led by Morris Louis and Kenneth Noland, the group focused on color-field painting. Notably, the Washington Color School artists were not fully aligned with the abstract expressionists as they did not rely on automatic painting, instead developing new techniques. However, the two are closely tied in chronology and methodology in other ways. They both focus on colorful stripes and shapes without engaging directly with figural representation, generating distinctive and complex styles of abstraction.

Alma Woodsey Thomas (1891-1978), the creator of Spring-Delightful Flower Bed (1967), turned to abstraction in 1960 after retiring from her career as a public-school art teacher in Washington D.C. Educated at Howard University and Columbia University, she was a skilled painter throughout her life, drawing inspiration from flowers and the natural world around her. Despite focusing on figural work previously, the bold, striking shapes in her abstract art style allowed her to innovate artistically even though she had developed arthritis in her hands. As a participant in the Washington Color School tradition, Thomas mastered the use of color, concentrating on the evocative and powerful ways in which people relate to different tones and shapes. Over the 20 years Thomas worked in this style, she created her own distinctive technique, juxtaposing bright tones in rainbow-like images. Reminiscent of watercolor paintings, labyrinths, and planetary figures, her work transcends representation and speaks to a wide variety of visual influences from the Impressionists to the German Bauhaus, intermingling with the development of gestural abstract art. Her characteristic, kaleidoscopic brushwork calls both to the luminous color-field paintings of her predecessors, as well as speaking to her fascination with nature, gardens, and space exploration.

As a long-term public-school educator, Thomas believed strongly in the ability of art to empower people and in the radical idea of beauty produced by the innovative practices of Black artists. Her incredible skill earned her high praise and accolades. Spring-Delightful Flower Bed was featured as the cover of Crisis Magazine, the NAACP’s publication, and her paintings are now found in institutions like the Metropolitan Museum of Art, the National Museum of African American History and Culture, and the White House Collection. Although not as politically focused as some of her contemporaries, Thomas’ work serves as a critical moment within American aesthetics, bringing attention to the excellence of Black abstract artists working in mid-century America.